All Eyes Are on The Fed

Posted in Financial Planning on September 26, 2016 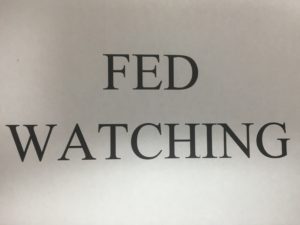 The Federal Reserve Board (“Fed”) met in mid-September 2016 and again, decided to leave interest rates unchanged.  The last time they have raised interest rates was in December, 2015.    They raised the target federal funds rate to a range of 0.25 to 0.5 percent.  This was the first time they had raised rates since June, 2006.  It had been almost a decade.

No worries, the Fed will meet again.  They meet eight times a year.  The next meeting will be in November.  No action is expected to be taken at this meeting.  The presidential election is a week away and there is no press conference scheduled for after the meeting in November.  The next meeting after that will be in December. Will they raise rates in December?  Who knows?  Should they raise rates in December?  Yes, they should.

The Great Recession of 2008-2009 was staggering.  The economic and psychological impact on many folks is still with us today.  The Standard and Poor’s 500 Index (“S&P 500”) lost approximately 50% of its value.  The Fed realized they needed to jump start the economy.  One of the Feds responses was to cut interest rates.  Additionally, they implemented a plan to purchase Treasury Securities.  This plan is known as Quantitative easing (“QE”). The Fed ran four separate programs of QE from 2008 to 2014.  Each of these programs was labeled QE1, etc. As they continuously rolled out another program we were left with wondering if the “E” actually meant ‘Eternity.’ The concept behind these programs is that the Central Bank creates funds to purchase securities from financial institutions. In theory this will reduce interest rates.  Lower rates should make consumers and businesses more inclined to spend money which will expand the economy.  Keep in mind, the Fed didn’t invent QE.  Japan ran their first QE program from 2001-2006.

Central Banks around the world followed the Feds lead.  The Bank of England quickly implemented their plan in 2009. The Bank of Japan (“BOJ”) restarted their QE plan in 2012.  Shinzo Abe was elected Prime Minster and implemented his economic plan which is known as “Abenomics.”  The European Central Bank (“ECB”) was very late to the party.  They introduced their QE plan in early 2015.

What have been the results of this?  Well, it depends.  What does it depend on?  Generally where you live and whether you were a saver, investor or borrower.  Let’s look domestically first.

The second mandate is interest rates.  The Prime Interest Rate, which is the rate banks charge their best customers stood at 7.75% in 2007. Today it is down to 3.5%.  As was mentioned earlier, lower interest rates should stimulate the economy as businesses and individuals will pay less on their monthly payments with lower interest rates.

Smart borrowers are also winners with this policy.  They have gone out and traded up and got a nice new home.  Or perhaps they got a second home down at the shore.  If they had enough of a down payment and have reasonably secure income, they should be fine.  The interest rates are very low and can be also tax deductible.  Smart borrowers only incur “Good Debt.”  This is debt that is used to purchase real estate or, perhaps (very key term) to help finance higher education.  Caution needs to be exercised when borrowing for higher education.  The total student debt in 2016 was $1.2 trillion and climbing.  The average student debt is $37,172.  2)  That’s a lot of debt.  We set down some simple rules so here is 3 Ways My Daughter Financially Contributes to her College Education.

Less than smart borrowers tend to be losers no matter what the policy.  They manage to use their credit cards to buy a ton of ‘stuff.’  You know, “don’t leave home without it.” Going out to dinner, shopping at the mall and all of their holiday purchases are put on their credit card. Then when the bill comes in they just make the minimum monthly payment required.  The interest rates on many credit cards are absolutely ridiculous.  These borrows specialize in “Bad Debt.”  This is debt that is anything other than “Good Debt.”  Car loans, credit cards, house accounts, alleged zero interest rate loans from retailers and so on.

What we know about real estate is several things.  First, it is cyclical.  Prices couldn’t go up fast enough in 2006 and 2007 before the crash. “Liar loans”, where you just make up figures of your income and assets were everywhere.  Second, real estate is local.  Some areas have been on fire since 2009, others not so much.  Finally, you’ve got to live somewhere, besides at your parents when you are in you late 20’s!  Millennials need to find out earlier that Things Are More Expensive When You Pay For Them Yourself.

It wasn’t that long ago when a retiree collected a pension, had social security benefits and some fixed income from CD’s they had accumulated through the years.  This generally provided a reasonable retirement for many folks.  What’s different now?  Start with pensions.  Who is getting a pension now?  A lot less folks are now.  Most companies terminated their pension and implemented a 401(k) plan.  Without a pension, one third of the three legged stool for retirement was gone.  During the dotcom meltdown of 2000 and the Great Recession of 2008-2009 many of these 401(k) plans lost significant value.  Finally, interest rates on CD’s essentially went to near zero.  These factors changed what used to be considered a reasonable retirement plan into perhaps a very marginal one.  Unfortunately for some, their retirement stool has been knocked over.  For retirees here is 4 Easy Steps to Stay Retired.

Banks are also losers with this policy.  Among other ways, banks make money on the spread between what it costs them to pay depositors and what they earn on their investments. Low interest rates have depressed their earnings.

Japan has its own issues.  The largest might be demographics.  Improved health care has people living longer. However, years of a low birth rate has slowed down the rate of people eventually entering the workforce.  The worker to retiree ratio is shrinking and this is not good for their economy.  The other major issue is that the Japanese are savers.  Yikes!  In the U.S. save is four letter word! We’ve all heard that economic statistic over and over again; the consumer is responsible for two thirds of the economy.  3)  It’s not too hard to see, is it?  Everything is bigger, from houses to cars and way more expensive.

Europe is struggling.  The world had to deal with the Great Recession of 2008-2009.  Europe was slow in their response.  This has hurt them in spades.  Additionally Europe has had to deal the British Exit (“Brexit”) with the U.K. leaving the European Union (“EU”).  The referendum was a vote to leave the EU.  This cost David Cameron his job as the Prime Minister as he was in favor of staying in the EU.  The new Prime Minster is Theresa May who was also in favor of staying in the EU but says she will respect the vote and move forward.  What this means exactly is unclear at this time.  It should be however the most expensive divorce since Paul McCartney got divorced.

Finally the migrants and refugees that have flooded into Europe have put a significant strain on social services, housing and security. It is estimated one million migrant and refugees have made their way to Europe in 2015.  Down the road, this may help in the workforce with filling in gaps.  In the short term however there are language, cultural and training issues that need to be addressed.

Where Do We Go From Here?

According to James Grant, founder of Grants Interest Rate Observer, his reading of A History of Interest Rates of research has indicated that there have not been negative interest rates in 5,000 years.  I don’t know about you, but 5,000 years certainly seems like a long time to me. Uncharted waters barely begin to describe where we are today!

CDs are insured by the FDIC and offer a fixed rate of return, whereas the return and principal value of investment securities fluctuate with changes in market conditions.  The S & P 500 is an unmanaged index of 500 widely held stocks that is generally considered representative of the U. S. stock market.  The Dow Jones Industrial Average (DJIA), commonly known as “The Dow” is an index representing 30 stock of companies maintained and reviewed by the editors of the Wall Street Journal. NASDAQ composite is an unmanaged index of securities traded on the NASDAQ system.  Inclusion of these indexes is for illustrative purposes only. Keep in mind that individuals cannot invest directly in any index, and index performance does not include transaction costs or other fees, which will affect actual investment performance.  Individual investor’s results will vary.  Past performance does not guarantee future results.

The information contained in this report does not purport to be a complete description of the securities, markets or developments referred to in this material. The information has been obtained from sources considered to be reliable, but we do not guarantee that the foregoing material is accurate or complete. Any opinions are those of Thomas F. Scanlon and not necessarily those of Raymond James.