Posted in Financial Planning on November 30, 2014 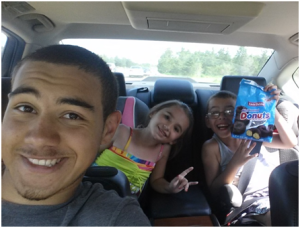 No, not me! Heavens no! I have a few helpers. They help you spend your money. Some folks call them ‘children.’ This is a colleague of mine whose goal was to be debt free by age 55. He reached his goal this year. Naturally I had to press him on how he was able to accomplish this goal.

He said it was a goal he set many years ago. He wasn’t quite sure how old he was when he set this goal but he believes he was 29. What he liked about this goal was its simplicity.  Be Debt Free by age 55. He said this made it much easier to focus on. He would look at this goal along with his other annual goals on his birthday in October.  By checking in with this goal he was able to keep it visible. This allowed him to keep this goal in mind when he was spending, saving or borrowing money.

When I inquired some more about how he was able to achieve this goal he said it wasn’t easy but it really wasn’t that difficult.  He and his wife bought their first starter house.  After they had two children they needed to get a bigger home. Keeping his long term goal of being debt free at age 55 they did buy a bigger house. But they didn’t buy the biggest house they could afford; they bought something a little smaller. And they only took out a 15 year mortgage because of it. He would save money for home improvements and projects so when they needed to be done he didn’t have to refinance the house.

He said they also always bought used cars. Sure, they weren’t the latest model and had some scratches and dings on them but they worked. He didn’t want to buy a brand new car and have it be worth a lot less when he drove it off the lot. This would not help him achieve his goal.

He also said while he watched his money, he and his family never felt they were denied anything.

When I asked him why this goal was so important he mentioned financial freedom. He’s still working and expects to continue to do so into his middle 60’s. He’s not financially independent. Yet.  But now he can spend and save some of his income. He has no debt and this has created his family’s financial freedom.

After my conversation with him my takeaways were:

* Have clear, written goals that you check in with at least annually

* Make conscious choices about how you spend, save and borrow money

* Don’t deny yourself. Life is too short.

The information contained in this report does not purport to be a complete description of the securities, markets or developments referred to in this material. The information has been obtained  from sources considered to be reliable, but we do not guarantee that the forgoing material is accurate or complete. Any opinions are those of Thomas F. Scanlon, CPA, CFP and not those necessarily  those of RJFS or Raymond James. Expressions of opinion are as of this date and are subject to change without notice. Tax preparation and accounting services are provided by Borgida & Company, P.C.,  not as a service of Raymond James. You should discuss your tax or legal matters with the appropriate professional. Any information is not a complete summary or statement of all available  data necessary for making an investment decision and does not constitute a recommendation.