Posted in Financial Planning on January 26, 2020 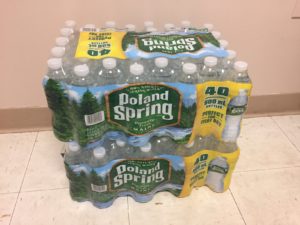 Mad Max 2 known as The Road Warrior was a 1981 movie that was the second installment of the Mad Max film series. The star and hero of the movie was Mel Gibson (remember him?) who played “Mad” Max. The setting was a post-apocalyptic world following a global nuclear war. The final scene is where Max, a former policeman, will leave the compound and settlers behind and drive his Mack semi-truck and trailer loaded with all of the petroleum in it. There is a nasty motorcycle gang (the bad guys) with Mohawks that will chase him down in pursuit of the oil. The bad guys die in the conflict and Mad Max’s truck turns over. However, petroleum doesn’t leak out. Sand leaks out of the truck. Mad Max and his truck were a decoy. The village people quietly left the compound escaping with the petroleum loaded in the back of their buses. Evidently, they didn’t need a Plan B.

For the survivors in The Road Warrior the fight was for oil. That’s no longer the case today. Oil, like coffee, agricultural products and metals are a commodity. Prices of commodities tend to be volatile. The oil industry has a long history of booms and busts.

Here’s a refresher about economics. Economics 101 is all about supply and demand. The model is fairly straight forward:

Supply and demand works in spades for commodities.

• When supply is up and demand is down, the price is WAY down.

That’s what happened to oil. Brent Crude Oil (ICE) which is the world benchmark hit a high of almost $140 in early 2008. In 2016 it hit a low of about $26. In early 2020 it closed at about $55 a barrel. 1) The decline in the price of oil certainly affected the energy industry. Employees were laid off. Many projects were halted. Companies merged. The rebound in price from the low has slowed some of this activity.

The Organization of the Petroleum Exporting Countries (“OPEC”) used to rule the oil world. The cartel had a stranglehold on the world’s oil when they were producing approximately 55% of the world’s oil supply. If you are a late 50 something year old like me you might remember the gas lines from the early 1970’s where odd-even rationing was implemented based on the last digit in your license plate. This was the result of our OPEC ‘friends.’ I had a big sign made that said, “Tell Shell to go to Heck.” Actually, it really didn’t say ‘Heck,’ it said Shell…minus the S. As of 2014 OPEC was only producing 39% of the world’s oil supply. 2) This certainly impacts their ability to influence prices. That’s not to say they haven’t tried. In November 2016, they agreed to limit their production. The challenge they have is how to limit production by country. They agreed to cut production by 1.2 million barrels a day. The challenge here is that this is a rounding error in a 96 million barrels a day market. 3)

Although it has slowed down due to the sharp decline in the price of oil, the expansion of advanced hydraulic fracturing and horizontal drilling (“Fracking”) also contributed to the supply of more oil. It’s fascinating how technology has a way of disrupting industries.

While it’s nice to pull up to the pump and not see gas for $4 a gallon we need to remember The Cost of Cheap Gas. It will be interesting to see what the impact of more energy efficient vehicles, electric cars and ride sharing services like Uber will do to demand for gas in the future.

Going forward it doesn’t appear that the fight will be about oil. If there is a resource that appears to be scarce it is potable (drinking) water. About 71% of the earth’s surface is water-covered. Of this, over 96% of this is salt water in the oceans. Only 2.5% of the earth’s water is freshwater or drinking water. 3)

Therein lays the rub. There is a ton of water in the world. It just needs to be made drinkable. Safely.

The water crisis has been highlighted with the water issues in Flint, Michigan. The city changed its water source and eventually had problems with lead contamination. Thousands of children were exposed to dangerous levels of lead in their drinking water. Thirteen former and current local and state officials have been criminally charged in this crisis.

The issue is that the problem isn’t just limited to Flint. According to USA Today almost 2,000 other water systems located in every state have shown excess levels of lead contamination over the past four years. 4) Let’s just hope that this is not The New Normal.

President Trump has proposed a $1 trillion (that’s with a T) infrastructure plan over a ten-year period. And that’s for all infrastructure including roads, bridges and other infrastructure. So far, the details are sketchy. Essentially, he is proposing tax credits for the private sector to build public works projects. Like other campaign promises, the devil is in the details and what the other legislative bodies will agree to. I don’t think there’s much argument that the country needs a major investment in its infrastructure. Connecticut residents can surely relate. They know that the road to success is like the roads in Connecticut. They are an always under construction.

Another issue is the drought. Take a look at California, the country’s most populated state with almost 39 million people. According to the U.S. Drought Monitor over 62% of California remains in severe to exceptional drought conditions. This drought has been running for five years now. 5)

The expanding population is also an issue. There are currently over 7.5 billion (that’s with a B) people on the planet. That’s up from less than an estimated less than 1 billion people only 200 years ago. 6) According to National Geographic this number is expected to go up to 9.6 billion Earthlings by 2050. 6) This won’t just put strains on water. It will also affect energy, food supply and the climate change.

Investing in water can be a challenge. Although water is a commodity, there is no market to trade water like there is for oil, gold or cotton. Additionally, unless you have water rights, you don’t own the water. The three largest water utilities in the U.S. are American Water Works (AWK), Aqua America (WTR) and American States Water (AWR). Water companies of course are utilities. As such they have their own share of opportunities and issues. Generally utilities are more popular with investors looking for income via the dividends they pay. The challenges of course are several fold. First, as was mentioned above, the infrastructure is very dated. This will require additional capital investment. And utilities tend to be a capital-intensive business. To fund this capital, utilities frequently borrow money. After a very long period of near zero interest rates, we see Why The Fed Got Off its Assets and Raised Interest Rates. The increase in the borrowing costs may affect the utilities bottom line. Additionally for utilities, at least some portion of their business is regulated. This regulation can be for rates charged and services rendered.

Remember when investing you want to maintain a diversified investment portfolio. Utilities only comprise 3.1% of the S & P 500 as of November 30, 2018. 6) Keep in mind this percentage includes all utilities including electric, gas and water.

Any opinions are those of Thomas Scanlon and not necessarily those of RJFS or Raymond James. The information contained in this report does not purport to be a complete description of the securities, markets, or developments referred to in this material. Investing involves risk and you may incur a profit or loss regardless of strategy selected. Diversification and asset allocation do no ensure a profit or protect against a loss.  Commodities investing is generally considered speculative because of the significant potential for investment loss. Their markets are likely to be volatile and there may be sharp price fluctuation even during periods when prices overall are rising.