7 Reasons Not to Wait Until Thanksgiving to be Grateful

Posted in Financial Planning on November 7, 2016 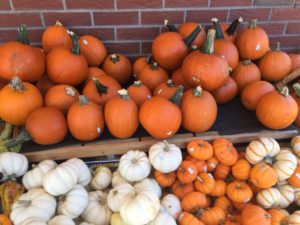 You don’t have to wait for Thanksgiving to be grateful.  You can be grateful every day.  It’s your choice.  Life might not be going swimmingly well for you every day.  I get it.  I truly hope you didn’t expect it to.  There have likely been speed bumps, potholes and dead ends in your past.  It’s likely there will be more in the future.  So, what can you be grateful for every day?  First, everyone has a Complimentary 1,440 Credit Card.  Use this card wisely.  Here is just short sampling of some other things to be grateful for.

If you have your health you are good to go.  Everything else is extra.  Remember that.  The issue seems to be that for many if you are healthy, well, sometimes you just take it for granted.  This is a big mistake.  Then when you do have a health issue, well, that’s when you start to appreciate it again.   Keep in mind if you want to stay healthy don’t forget to Diet and Exercise.

If you have your family and they are all healthy then you are already in the Double Bonus.  There’s not a whole lot more you can ask for.  Even though, well, you likely will.  It’s that keeping up with The Jones’s thing.  Let The Jones’s go and just remember we are all just Average Joes.

Granted by the end of Thanksgiving Day it’s possible you will have had way more than your share of your family.  You are even considering how to escape spending so much time with your in laws at the Holidays.   At the very least you are starting to plan your ‘Ditch Your Relatives and Have Your Friends over Party.’

If you are a U.S. Citizen you have already won the lottery.  Big Time.  Let that sink in.  Do we have issues here domestically?  You bet we do.  But this post is about gratitude, not wining and moaning about how difficult it is.  Despite our issues, you probably still wouldn’t want to be anywhere else in the world.  Just take a look at other countries around the world.  Heck, just take a look at the country south of us, Mexico.  Every heard of anyone sneaking into that country at night?  I know I haven’t.

Then take a look at the migrants.  It is estimated that 1.3 million people left war torn countries like Syria, Afghanistan and Iraq and headed to Europe in 2015.   2) Many of these migrants went to Germany and Hungary.  These folks are literally risking their lives to find a better place.

The educational opportunities we have are outstanding.  With that said getting a four year college degree is a huge investment these days.  According to the College Board the average cost of tuition, room and board and fees for a private four year college was $43,921 for the 2015-2016 year, a 3.5% increase from the prior year. 3) That’s for just one year, for one child.  While there are tons of educational opportunities, caution needs to be exercised as to how to pay for them.  The total student debt in 2016 was $1.2 trillion (that’s with a T) and rising.  The average student debt was $37,172.  4)

Getting into a college is just the first step.  Finding a way to pay for it that makes sense is also important.  Oh, yes, and graduating is also key.  Only 52.9% of students enrolled in colleges and universities graduated within six years.  5)

Most folks however will need some training after high school just to compete.  I know, Bill Gates, Founder and Former CEO of Microsoft doesn’t have a college degree as he dropped out of Harvard, is the richest person in the world.  His net worth is estimated at approximately $82 billion dollars.  Just remember, there is only one Bill Gates.

Granted, not everyone is cut out to go away to college and get a four year degree.  That’s OK. There are other opportunities.  Attending a local community college is a great way to get started with higher education.  Also, the price is right.  Actually, it’s a screaming bargain compared to attending any four year college.  Our son attended Manchester Community College and he enjoyed it.

College isn’t for everyone.  That’s fine.  Trade school can be a great alternative for many.  Plumbers, electricians and HVAC technicians are in high demand.   These careers will ebb and flow with the economy as they are tied to the construction industry.  Sometimes there may be a ton of overtime required.  Other times you may be getting a pink slip due to a lack of work for a few months.  That’s the nature of being in the construction industry.  One thing to remember however is that these jobs don’t get outsourced to India.  When you need a plumber, well, you need a plumber!

In today’s economy there are a lot of employment opportunities.  Not every job opening is for the President of the company.  This job comes with stock options galore, five weeks of vacation and a designated parking spot right near the front door.  That’s just how it works.  Remember, there is only one President for each company.   If you are applying for any other position, get ready to work.  Your job is to make the President and the company looks great.  Hopefully you will be rewarded.

The unemployment rate declined from a high of 10% in 2009 to 5.0% in 2016. 6)   This of course is the official rate issued by the government known as U-3.  When digging a little deeper we see there are issues with this number.  The broader measure of unemployment is known as U-6. This includes people that have part-time jobs but would really like to be working full time.  U-6 peaked at 17.1% in March 2010 and is now at 9.7% in August 2016.  While we have made significant progress since the Great Recession of 2008-2009 there is still more work that needs to be done.

Interest rates have been on a long and steady decline since 1980.  The government’s response to the Great Recession of 2008-2009 was to push interest rates to near zero.  This has made borrowers ecstatic.  Consumers can go out and buy more stuff and a get close to zero interest rate for 36 months while they pay it off.  Consumer spending accounts for about 70% of the Gross Domestic Product (“GDP”).  7) Good thing rates are low for consumers.  It makes it much easier to consume. While some borrowers are back spending like drunken sailors, savers are more than slightly annoyed.

With near zero interest rates savers have been penalized.  Big time.  Many retirees and pre-retirees had saved and put money into CD’s.  The interest earned would provide them with some fixed income.  With interest rates near zero CD’s are not very practical anymore.  This has frustrated fixed income investors.

The Federal Reserve Board (“The Fed”) will meet in November.  No action on interest rates is expected as the Presidential Election is only one week after their meeting.  The Fed will meet again in December.  They have not raised the Federal Funds Target Rate since December 2015.   The last time they had raised this rate was in June 2006.  This was almost a decade earlier.  Whatever happens at their December meeting All Eyes are on The Fed.

CDs are insured by the FDIC and offer a fixed rate of return, whereas the return and principal value of investment securities fluctuate with changes in market conditions.  The S & P 500 is an unmanaged index of 500 widely held stocks that is generally considered representative of the U. S. stock market.  Keep in mind that individuals cannot invest directly in any index, and index performance does not include transaction costs or other fees, which will affect actual investment performance.  Individual investor’s results will vary.  Past performance does not guarantee future results.

The information contained in this report does not purport to be a complete description of the securities, markets or developments referred to in this material. The information has been obtained from sources considered to be reliable, but we do not guarantee that the foregoing material is accurate or complete. Any opinions are those of Thomas F. Scanlon and not necessarily those of Raymond James.