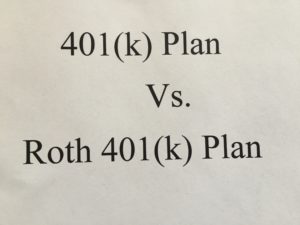 The 401(k) plan has become one of the primary retirement vehicles many people will use to help fund their retirement.  It is one of the cornerstones in 5 Easy Steps to Retirement.  Pre-tax contributions and tax-deferred compounding are what makes the 401(k) plan so appealing.  In 2016 employees can contribute up to $18,000 a year into their 401(k) plan.  Additionally, people over age 50 can make a so-called catch-up contribution of up to $6,000 a year.  So in 2016 employees over age 50 participating in a 401(k) plan can contribute up to $24,000 a year.  The purpose of this catch-up provision is that Congress believed many people haven’t been saving enough for their retirement.  Imagine that, for once they were right.  These are just the annual employee limits.  Employers can also design their plan to make matching contributions.  Both the annual contribution limit of $18,000 and the catch-up contribution of $6,000 are indexed to inflation, but only in $500 increments.

How much can an employee expect to save in their 401(k) plan?  Naturally, if they can afford it, consider contributing the maximum allowed.  Unfortunately many people aren’t in this position.  For example, an employee starts working at age 22, signs up for the 401(k) plan at work and retires at 62.  During these forty years they continue to work for various employers that offer a 401(k) plan.  For the first ten years of working they contribute $6,000 a year to the plan.  For the next ten years they increase their annual contribution to $8,000.  The following ten years they increase this to $10,000 annually.  Finally, during the last ten years of working they increase their annual contribution to $12,000.  If the rate of return was 7% after they were done working they would have $519,840.  That’s a tidy sum of money.  Perhaps not enough to replace getting a pension check, but it’s a good start on funding their retirement.  Please note the annual contributions made in this example aren’t even close to the maximum allowed.  Additionally, we didn’t have any employer matching contributions.  This example however really brings home an important point.  Through the years an employee’s wages should go up.  Just take a portion of these pay increases and put them into the 401(k) plan.  In our example the contribution is only increased by $2,000 every decade.  With just this modest increase over half a million dollars can be accumulated over your career in a 401(k) plan without any employer match and assuming a 7% return.

Remember, when planning for retirement, just start where you are now.  We recommend saving at least 10% of your annual income.  That’s at least.  Don’t kick yourself because you ‘only’ put 4% into the 401(k) plan last year.  It is what it is.  Move on.  Figure out how to increase it to at least 5% this year, and 6% the following year.  Keep your eye on the prize, retiring when you want to.  Remember, This is NOT Your Parents Retirement.

The Pension Reform Act of 2006 has made it easier for employers to automatically enroll their employees into their 401(k) plan.  The government was concerned about the lack of employee participation in these retirement plans.  It is estimated that only 65% of eligible employees participate in their employers’ 401(k) plan.  With most companies terminating their pension plan, having employees participating in a 401(k) plan is crucial.  Employers that make this election can automatically enroll their employees into their plan.  Employees that don’t want to participate in the 401(k) plan can elect out.  Employers can also automatically invest the employees’ 401(k) plan contributions for them into a default investment.  This is typically invested in something more aggressive than a money market fund but still fairly conservative.  These investments tend to be a balanced fund, life-cycle or targeted retirement date fund.

The government was also concerned about the low level of annual contributions made by many 401(k) plan participants.  According to Fidelity Investments, the average 401(k) plan account only had $87,900 in it at the end of the December 2015. (1) For employees that were automatically enrolled employers can also automatically increase their contribution levels over time.  The guidelines call for these employees to contribute a minimum of 3% in the first year.  This is increased the following year to 4%, to 5% the year after that and finally the next year to 6%.  These guidelines don’t affect employees that are already enrolled in the 401(k) plan or employees that have elected out of the plan.

If an employer elects automatic enrollment, new employees will be enrolled into the company 401(k) plan and have their contributions deducted from their paycheck.  If an employee didn’t want to participate in the 401(k) plan they can elect out of the plan.  With that said, please, don’t elect out of your 401(k) plan.  Your employer is doing you a big favor, although I’m sure it doesn’t feel like it when they start taking your contributions out of your paycheck.  It’s like making your teenage son do his homework.  He’ll tell you how painful it is to do. The results of his effort however usually will show up in the report card.

The 401(k) plan was first implemented in 1981.  The idea of the 401(k) plan at the time was taken from the movie Field of Dreams.  “If you build it, they will come.”  Well, the 401(k) plan was built and many but certainly not all employees came.  At the time many of the largest employers offered a defined benefit or pension plan.  The idea was to give employees an additional way to save for retirement.  Employees however had to take the initiative to complete the paperwork to enroll into the plan.  With a pension plan the employer has the responsibly to fund its employees retirement plan.  Regrettably, we know what’s happened to company pension plans.  The 401(k) plan is an excellent vehicle to save for retirement.  With a 401(k) plan however both the responsibly for funding retirement and the risks of investing are shifted from the employer to the employee.

For many employees that aren’t covered by a pension plan, the 401(k) plan will probably become the foundation of their retirement plan.  Unfortunately the 401(k) plan has a few issues.  Some employers don’t provide a match.  Other employers were providing a match but have now suspended this.  If that’s the case with your employer, you won’t be getting this fringe benefit.  That’s okay.  Employees shouldn’t necessarily skip the plan just because there’s no employer match.  If the plan is appropriate, enroll in it to take advantage of tax-deferred and systematic investing.  Even if an employer provides a match, employees need to stick around long enough to get vested in this benefit.  Another issue is that some 401(k) plans may have limited investment options or high expenses.  Get a copy of the plan document from the plan administrator and review it carefully to understand what your options are.  One of the more significant problems came to light when Enron went bankrupt in late 2001.  About 60% of the plan assets were invested in the company stock.  Many Enron employees lost their entire 401(k) plan account because it was all invested in the company stock.  Although Enron is now just a very sad footnote in the history of corporate America, don’t forget the most valuable lesson it taught us:

Don’t have too much of your 401(k) plan account invested in your employers’ stock.

Fortunately, many investors seem to have learned their lesson.  According to Employee Benefit Research Institute company stock declined from 19% in 1996 to 8% in 2011. (2)  One aspect of The Pension Protection Act of 2006 addresses employees investing in their employer stock in the 401(k) plan.  This law requires employees’ quarterly 401(k) plan statements that have more than 20% of the account invested in the employers’ stock to be warned about the risks associated with this.  This 20% limit is very liberal.  It’s two times my recommended limit of not having any more than 10% invested into any one stock.  Most academic studies suggest investing no more than 4% of the equity allocation into any one stock.  The risk here is specific stock risk. This is the risk of having too much of your assets invested into one company.  Well, at least these 401(k) plan participants are finally getting a warning now about this risk.  Unfortunately this ‘warning’ doesn’t kick in until these plan participants have invested five times the amount of what most academic studies recommend.  And, like the warning on a pack of cigarettes, its likely most smokers don’t heed the warning.  For employees that have more than 20% invested in their employers stock I suspect it’s because they believe in the company.  Or, it’s just inertia.  When they signed up for the plan perhaps they allocated 20% of their contributions to the company stock and they haven’t changed is since then.  Either way, investors shouldn’t let this cloud their judgment.  Having this much invested in your employers stock just isn’t worth the risk.

The stock market decline resulting in the Great Recession of 2008-2009 made 401(k) plans an easy target.  Most investors in a 401(k) plan saw their account balance decline.  Subsequently there have various government proposals to ‘fix’ the 401(k) plan.  Despite these issues with the 401(k) plan, the vehicle, however, should remain intact.  The benefits of these plans far outweigh any issues with them.

The 401(k) plan will be the cornerstone for many peoples retirement plan.  This plan may not however be enough to provide for the type of retirement most people would want.  This means taking a closer look at IRA’s and Roth’s to see if they are eligible to fund these tax advantaged retirement vehicles.
(1) Fidelity Investments  2/4/2016
(2) Morningstar  7/1/2013
(3) Forbes  8/19/2104

Opinions expressed in the attached article are those of the author and are not necessarily those of Raymond James.  All opinions are as of this date and are subject to change without notice. The information contained herein is based on current tax laws which may change in the future. You should discuss any tax or legal matters with the appropriate professional.  Any information is not a complete summary or statement of all available data necessary for making an investment decision and does not constitute a recommendation. This article includes hypothetical examples for illustration purpose only and does not represent an actual investment.  Actual investor results will vary. Past performance is not a guarantee of future results.